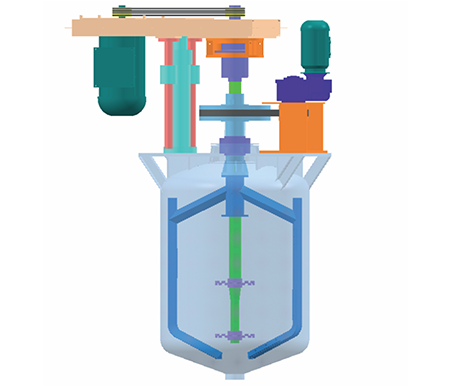 Twin shaft Dispersers (TSD) mixer is a combination of two mixers, one being an anchor / scraper operating at lower speed and the other being saw tooth / cowls disc impeller operating at high speeds to achieve good dispersion of solids. Dispersion is a process of dispersing solid particles in a liquid. Homogeneous dispersion of solid particles in a liquid is typically required for various applications in process industry.

However, conventional mixers used for dispersing solid particles in the liquid does not produce a homogeneous mixture of the dispersed solid particles in liquid. The presence of undispersed solid particles, like pigments, in the liquid causes non homogeneous mixing, thereby affecting the very cause for which the mixture is to be used. Furthermore, if the mixing components are viscous, they have a tendency to stick to walls of a vessel in which they are mixed. Such fluid adhered to the walls require to be dislodged from the walls by scraping action, and pushed towards the center of the vessel. The conventional mixers are unable to perform such action.